Gauge of Enlightenment II: A Tale of Two Needles 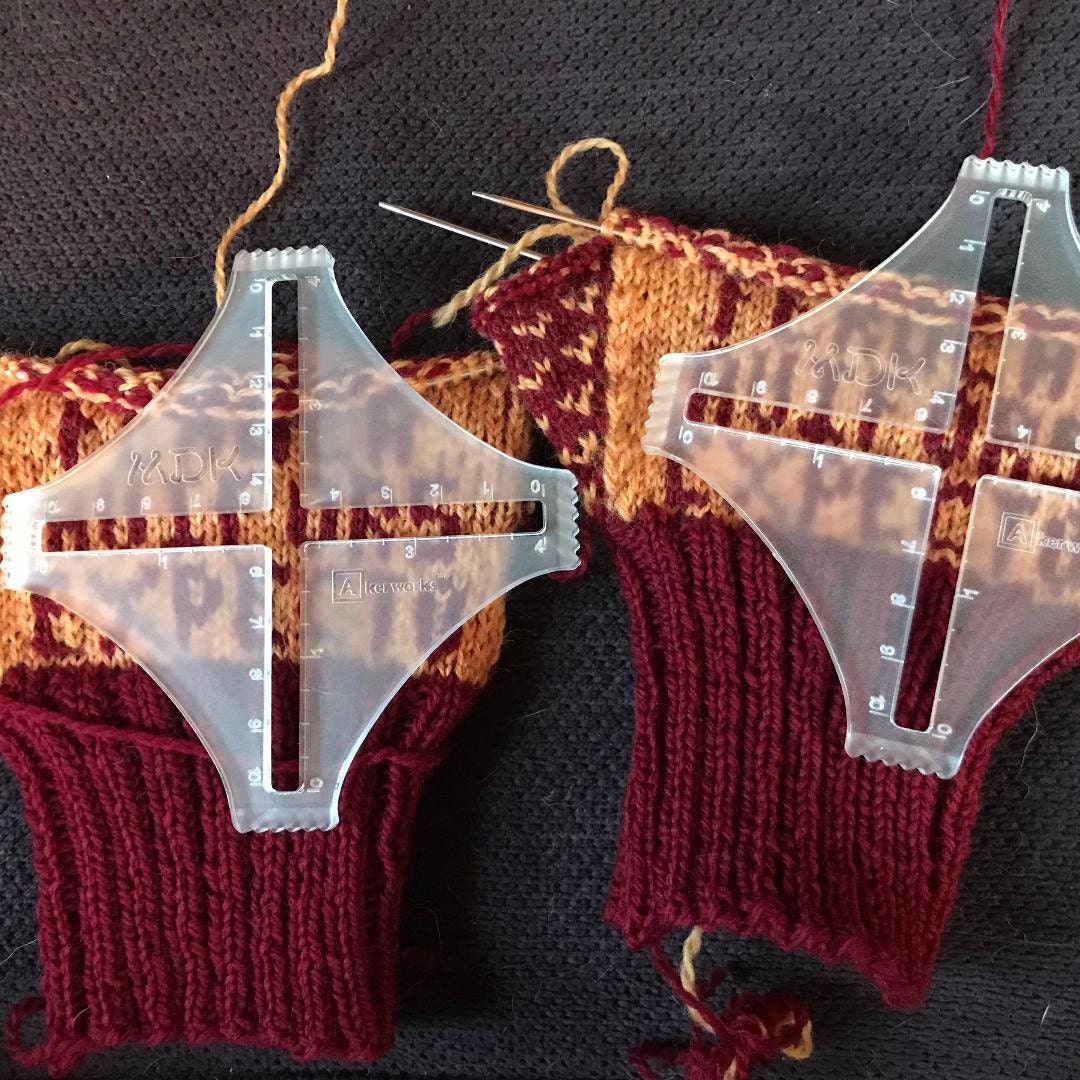 Just about a year ago, I wrote a post about gauge swatching.  I was embarking on my most complex project to date (Berroco’s Abayomi...a calf length lace cardigan/duster), and I was hell bent on making it fit me properly.  So, for the first time ever, I knit and blocked several swatches until I matched the gauge called for in the pattern.  Frustrating as it was, it was worth it in the end...my Abayomi came out the exact size it was supposed to.

I don’t swatch for the majority of the items I knit, however.  Why?  Well, a significant number of the items I knit each year are blankets of my own design.  These blankets all use the same yarn, and are all knit on the same needle.  Not to mention I’ve knit most of them several times before...I know what size they will turn out before I start.  The rest of my orders are things I have knit so many times before, I know what I need to do to get them to turn out to be the right size.

This week, I’m working on a pair of Harry Potter OWL Mittens for a customer.  I’ve made about 10 pairs of these mittens over the last couple of years.  This is one of the extremely rare patterns where the needle size called for in the pattern knits up at the proper gauge for me.

Until today, that is.

Since the last time I got an order for these mittens, I discovered a new kind of needle: the Addi Flexi Flip.  It’s a kind of hybrid between a double pointed needle (which is what I have always used to knit these mittens), and a circular needle.  I won’t bore you with the details...but suffice to say, I find it significantly easier to knit with a Flexi Flip than a traditional double pointed needle.

Anyway, as luck would have it, the size mitten my customer ordered calls for a 2.5mm needle, and I happen to have a set of 2.5mm Flexi Flips.  Woohoo!  Life just got a lot easier.  I cast on for the mittens using the Flexi Flips, and started knitting.

Not too far into the first mitten, my gut started sending me warning signals that these seemed a bit big.  I double checked the needle size.  Yep, these were absolutely the right size needles.  I kept going.  As soon as the thumb gusset was complete, I tried them on.  Not only were they too big, they were WAY too big.

Here’s the thing: the DPNs I have used in the past to knit these mittens are made of nylon.  The Flexi Flips are nickel plated.  Even though the needles are the same exact diameter, they result in different stitch sizes, due essentially to the friction differences of the needle materials causing me to knit looser on one type of needle versus the other.  What does that mean?  In this case, it means that by switching to the lower-friction Flexi Flips, the mittens were knitting up at a size L rather than the M that were ordered.  It also meant I lost a day’s worth of knitting, because I had to start over.

Did I go back to the trusty old DPNs when I started over?  Nope.  I took the 2.0mm Flexi Flips I was using to knit socks for my son out of that project and started a new pair of mittens with them.  The new mittens are measuring out perfectly as a size M.

It’s a little tough to see in the picture above, but the difference between the two mittens is 1.5 stitches per inch.  That roughly translates into one mitten having a circumference of about an inch and a half larger than the other.   The moral of the story: if you’re going to change needle types for a repeat project, you need to swatch to check gauge beforehand.

** P.S.  On the bright side, I’ll order a little more yarn so I can finish the size L mittens when I have the time.  Someone is bound to order them at some point!