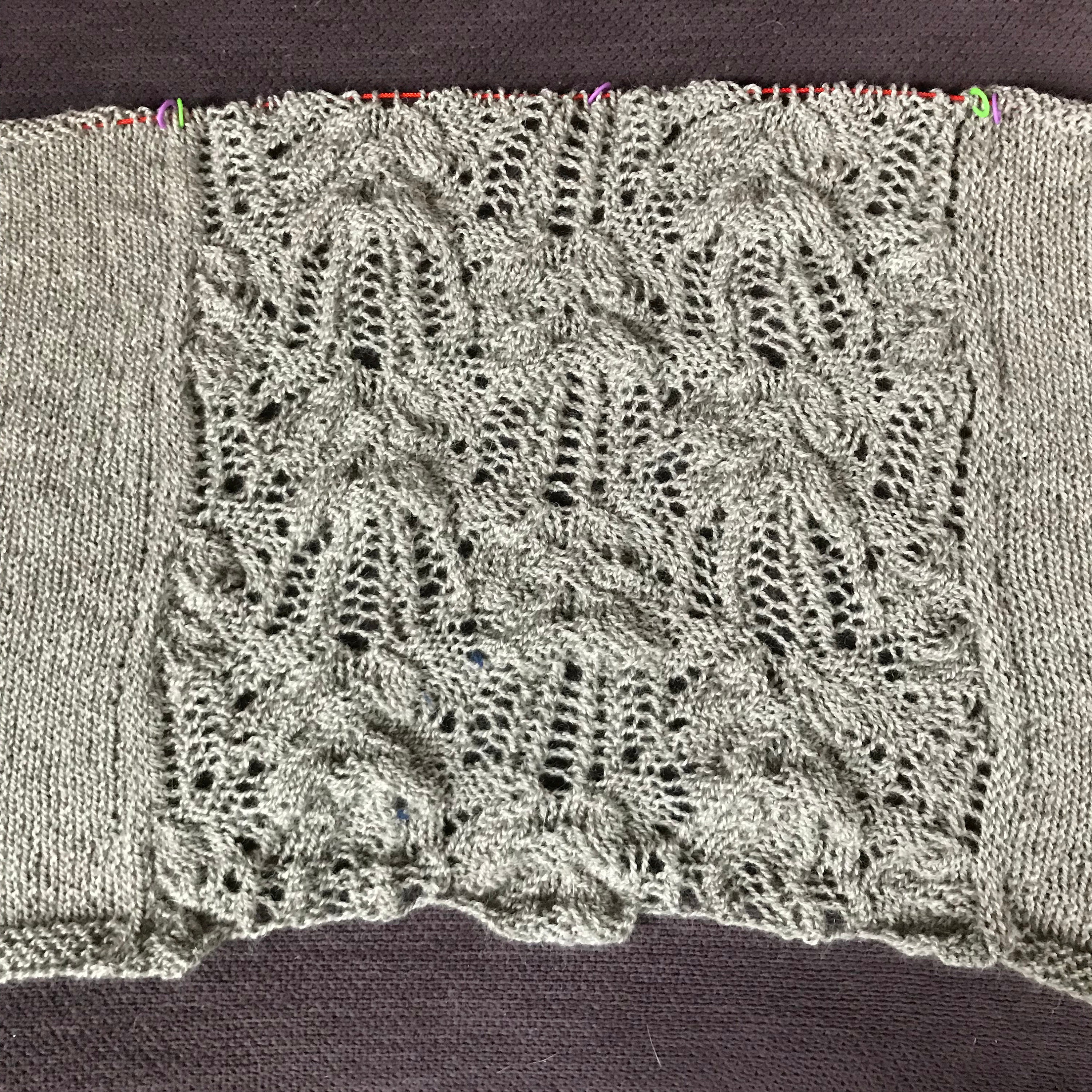 In my last post, I mentioned I was taking this week to catch up on a monumental list of unpleasant tasks, among them cleaning and assembling tax documents. On Monday, I alternated cleaning the pig sty my house has become with finally finishing the Nycteris Shawl. Tuesday found me going through receipts, categorizing them, and totaling them up for our accountant. I shipped off two orders. I dealt with shop administrative tasks. And with temperatures in the 50’s, I went for a three-mile walk with my best friend. I bleached all of my kitchen counters, and cleaned the microwave. I washed the kitchen floor AGAIN, because every time my dogs came inside, they tracked giant muddy pawprints all over the place.

I tell you all of this not because I want praise for doing my chores (although anyone who wants to throw me a parade for my domestic awesomeness is more than welcome to do so), but because I decided after being so virtuous, I needed – nay, DESERVED – a reward.

So I sat down, and cast on for the Abayomi.

As regular readers are all-too-aware, I have been dying to start this project. It has been on my mind for months. I’ve practically been salivating every time I look at the yarn. Hell, I even took three skeins with me to Scotland, on the off chance I could start the project while crossing the Atlantic.

With my new KnitCompanion app, I set the progress bar to the first row of the lace chart. I had my stitch markers waiting to be deployed. Leslie Knope and the rest of the Parks and Recreation gang were keeping me company on my TV screen. I was ready.

You know when is the best time to start a complicated project? I’ll give you a hint: it’s not when you are already exhausted from a day of mind-numbing chores plus your first major exercise session of the year. Someone please remind me of that next time around.

It took me a couple of tries to get the first row of the panel knit properly. That didn’t worry me – this often happens to me with set up rows. Once I have the set up row in place, the project usually flies.

I wasn’t accounting for the fact that I haven’t knit from a chart for anything other than intarsia in decades. DECADES. And intarsia is easy, because you see the picture forming as you go. And, come to think of it, I don’t think I’ve ever knit lace using a chart before. Hell, I’ve never really done that much lace knitting, period.

After the first row, I decided I needed to throw in a couple more stitch markers than the pattern called for…just so I could tell I was off track sooner than at the end of each 64-stitch lace section. Well, that did help tell me I was off track. I found myself frogging part of each row for the first six rows…which is when I decided to call it a night. Those six rows had taken me two hours. TWO HOURS. At this rate, it’ll take me until the end of the decade to finish it.

Today, my chores had me out of the house until about 2:30. When I got home, well…I’ll admit it: I was reluctant to dive back into the Abayomi. Had I bitten off more than I could chew? Was this piece destined to remain less than an inch long? I procrastinated for about an hour with various shop tasks, responding to customer emails, that sort of thing. Finally, I mentally smacked myself upside the head and picked up the project and started knitting. As I approached the stitch marker signifying the middle of the chart where the lace section begins, I tensed up, sure I was going to have to frog back and do it again. But, no! It was perfect. Same thing when I hit the final stitch marker for the lace section. And for the next row, I was also on target. I breathed a sigh of relief. Maybe I was just to tired to see straight last night.  Onward! 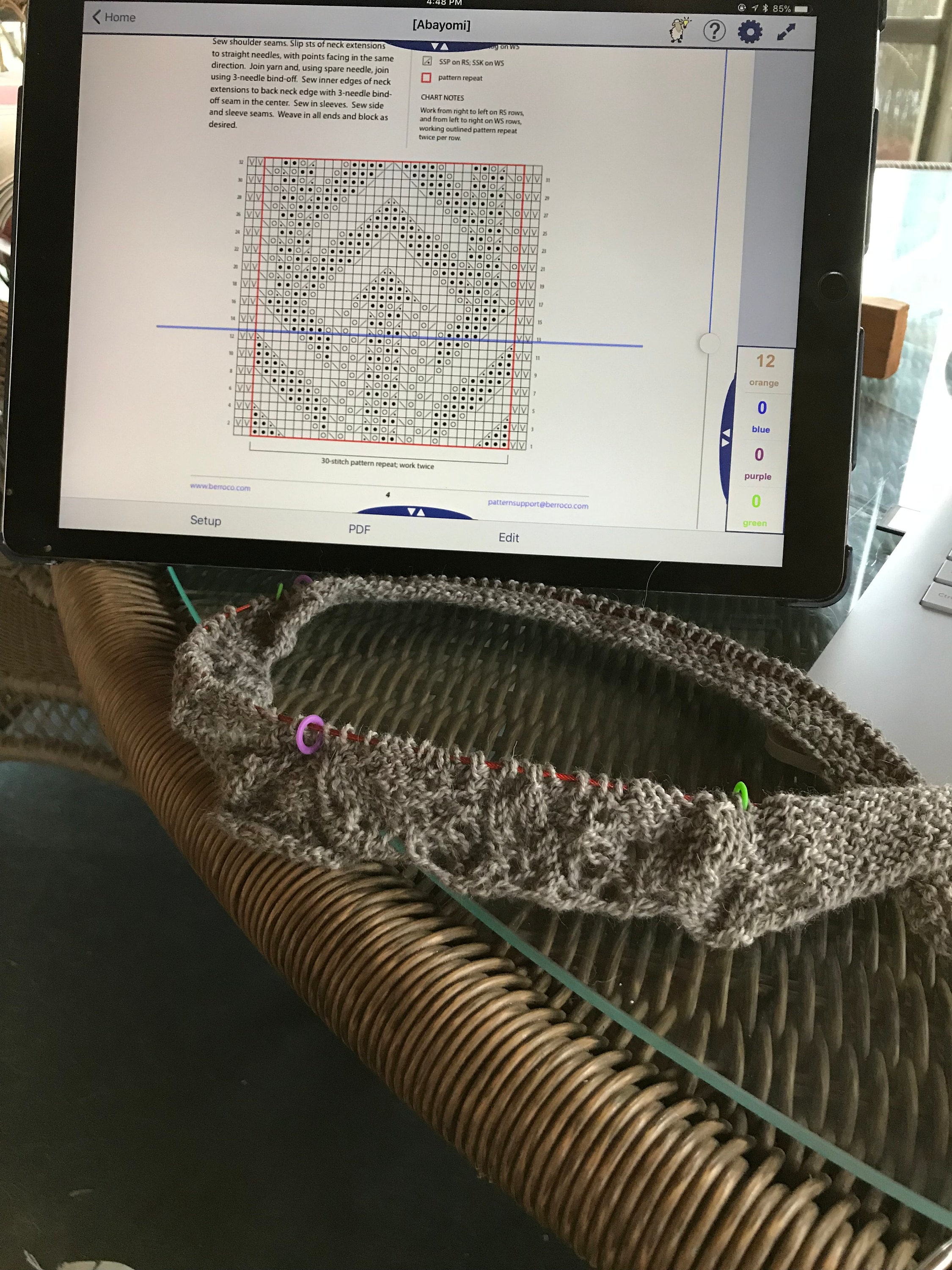 Well, cleaning or other tasks didn’t seem to happen today. I did, however, finish the first 32 rows of the 32 row repeat of the lace chart. I did encounter a couple of times where I had to frog back, but never more than 30 stitches. I’m starting to get a feel for the pattern, and can sense when I’m off track. (I can’t tell by looking at it yet to know exactly what I have to do to get back on track, though. Maybe that will come with time.  Or not.) 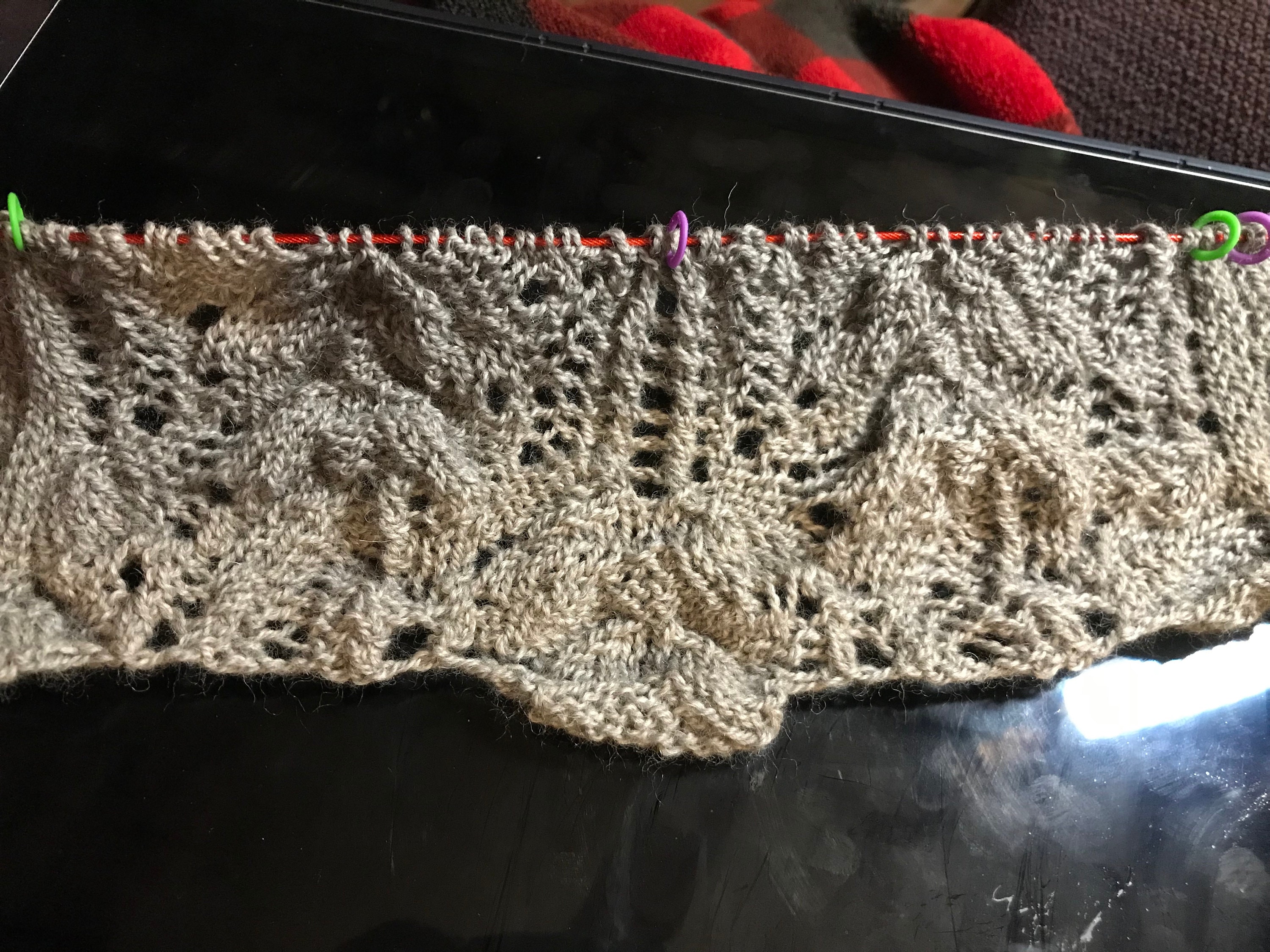 Today I cleaned our bedroom. Following the mantra of “Worst First” I suppose I should have tackled that task sooner, but whatever. It’s done now. I rewarded myself with spending the rest of the day working on the Abayomi, and I started and completed the second 32 rows of the chart.  I timed myself, and determined that I can do about 8 rows every hour (assuming I don’t stop to text my BFF, check Facebook, or engage in any of my other favorite distractions).  Memorization of the key is not yet 100%, but I’m close – and that makes this WAY easier to knit. I’m really feeling happy with the project now!

The non-knitting tasks on my to-do list are dwindling. I packed up a bunch of the yarn cluttering my living room/knitting studio floor and stored them in the basement, with the goal of making my workspace a little less messy. There were so many skeins of yarn I just wanted to play with, rather than put in storage, though!  I also wound ten skeins of Ecological Wool for my next three orders.  Once all that was done, I sat down to knit another full chart (32 rows) on my Abayomi. After I messed up a couple of times early on because I found my eyes jumping up and down between rows on the chart, I decided to take a break and watch a YouTube video to figure out how to make the KnitCompanion app highlight the row of the chart I’m working on, rather than just have a line above it. DEFINITELY worth the 45 minute effort!

I’m bummed out that I will have to limit my knitting time of this project going forward to focus on orders, because I really am loving it. From here on out, while I have orders, I’m going to give myself one hour a day to devote to this project six days a week, and a half day one day per weekend.