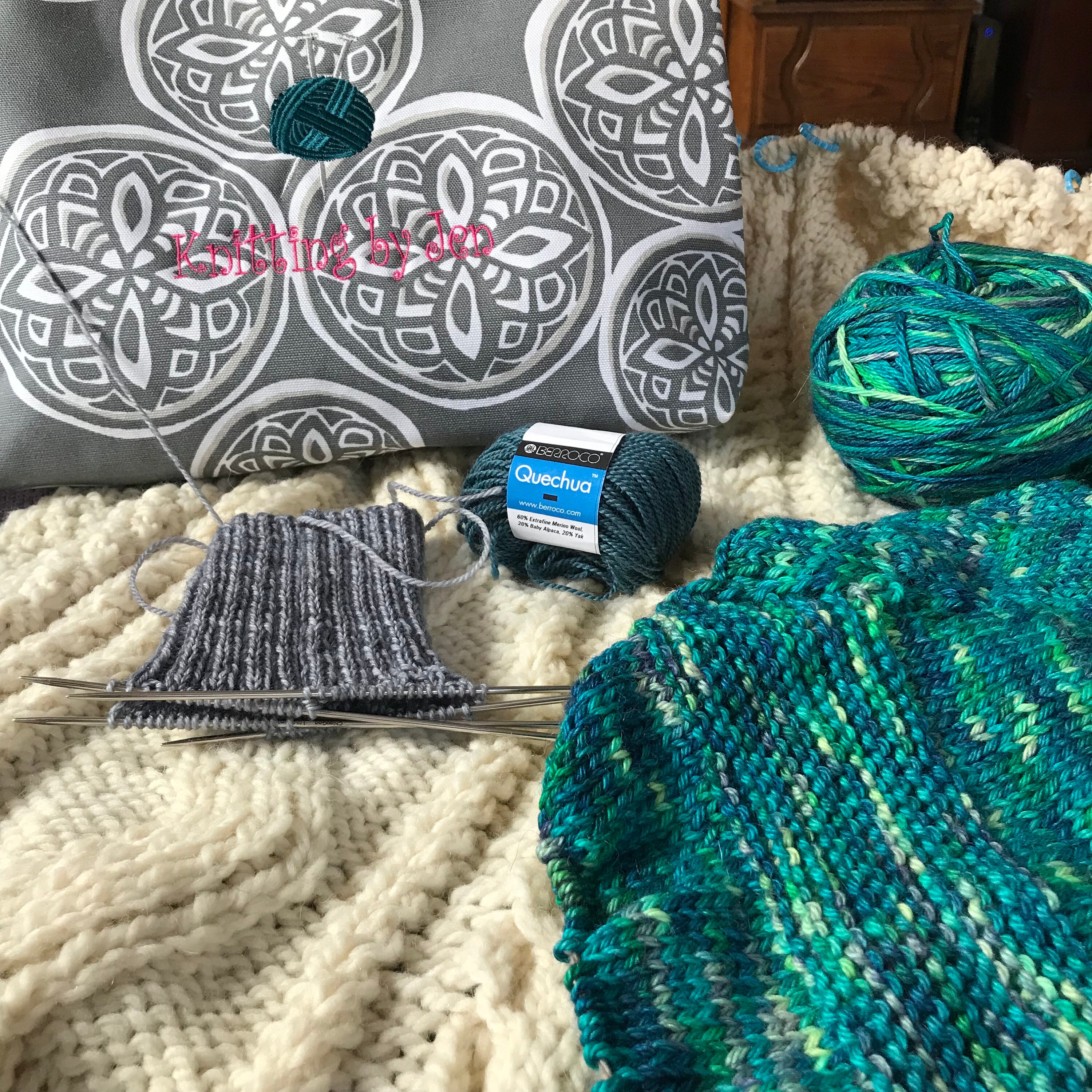 I've seen several other knitting blogs/sites talking about knitting goals for the new year, and it got me wondering about my own.  In my first post, I reviewed my knitting accomplishments for 2017, so now it's time to figure out what I want to do in 2018...I've given it a lot of thought, and I'm putting it out there all Oprah/The Secret-style.  We'll see in 360 more days how much of this I can pull off.

The biggest goal I'm setting for myself is not shop related.  At the WEBS Knitting Retreat in September, the Berroco Yarn rep had among her samples the most divine knit lace long sweater/coat I had ever seen, called the Abayomi.  It was so beautiful that WEBS featured it on their fall 2017 catalog cover.  I WANT TO MAKE THAT COAT.  Badly.  I want to make it and wear it to the 2018 retreat.  As soon as I settle on a color -- I'm leaning towards Palace, which on my iPad screen looks like a deep red -- I'll order the yarn.  Finding the time to make it with all of the orders I get each year will be challenging, but I am determined to carve out the time.

A close second for my biggest goal is to enter and win the Topsfield Fair knitting competition.  How's that for hubris?  Yeah, I'm totally setting myself up for disappointment, but hey -- dream big!  I had no idea this was even a thing until this past fall, right after the fair ended.  A new yarn store opened up close to my house in August, and I follow them on Facebook.  They posted pictures of customers' entries into the fair, and I was stunned.  I've lived in this area for nearly two decades, and had NO IDEA there was a knitting competition component to the fair.  A dream was born.  Ideally, I'd like to design a new Irish throw blanket pattern and enter that, but we'll see how the year progresses.  I'm definitely entering something.

While I'm on the subject of designing, I'd like to design and publish on Ravelry at least 3 new patterns in 2018.  That seems like a pretty reasonable goal, especially since I already designed a hat pattern this week -- I just need to publish it, and hey presto!  I'm a third of the way to my goal already!

My most reasonable-sounding goal (yet will probably be the most challenging to follow through on) is to complete all of my WIPs.  I have three from 2017 still lingering: a Ryan Irish Throw Blanket that I started over the summer for inventory during those few short weeks when I didn't have any orders; the Time's a Thief scarf that lives in my car in case I find myself waiting around somewhere; and a pair of 8 Stitches Per Inch socks for my husband that I meant to give him for Christmas but am now aiming to finish for his birthday next month.  Those three are not really too challenging, though.  The real challenge will be to deal with the WIP that has been around since 2016: a Nycteris Shawl from the very first YarnBox I ever got.  It's 3/4 finished...and I really don't like it.  I either need to finish it and be done with it, or tear it out and make something different out of the yarn.  I've been paralyzed by that decision for over a year.  Time to fish or cut bait.

Next on my list for this year is to learn to loom knit.  My son gave me a set of circular looms for Christmas after seeing one of his drama teachers using hers backstage during the musical this fall.  I love that he saw a new (to him) kind of knitting, and thought of me.  I can't say I know anything about loom knitting, and there's not a heck of a lot on Ravelry about it.  So, maybe I'll teach myself, and even publish a loom pattern, too!

Finally, since the highlight of 2017 for me was the WEBS retreat, I'd like to attend that and another conference in 2018.  Connecting with other knitters, yarn companies, and dyers was such a pleasure that I'd like to do more of it.  I'm partway to achieving this goal, since I registered for Stitches United in CT in March.  And I am counting down the days until I can register for WEBS 2018...I really hope some of the friends I made last year will be making the trip again, it'll be so much fun if they do.

That's it.  Will I realize all of these goals?  Some of them?  None of them?  I've got a little less than a year to do all of this, plus continue to knit all of my customer orders (last year, that was 90+ items of varying size/complexity).  Stay tuned, I'm sure future posts will get into whether or not I'm on track to meet all of these goals!